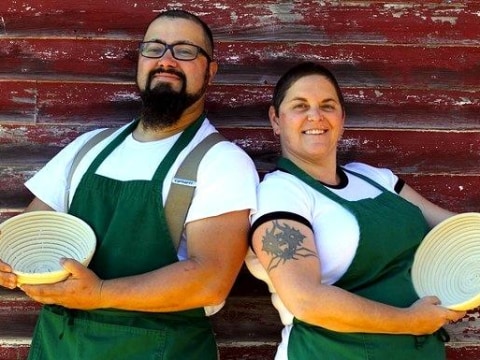 A loan helped build a wood-fired bread oven on our new farm. This will allow us to generate revenue as we continue restoring the property, the dairy, and working toward our goal of being able to devote ourselves fully to farming to benefit and nourish our community.

Dan and Kim’s story starts with a love of good food and continues with the challenges of farming. Growing up in Lake Carmel, NY, surrounded by a family heritage of Italian and Puerto Rican cuisine, Dan was exposed to good flavors early on. Kim grew up in Beacon, NY and spent several years in Griffith, Indiana where her father worked at the family owned and operated Patty Cake Bakery. Being both semi-accomplished cooks and foodies in their own right, Dan and Kim’s inquisitive nature led them to look into producing their own food and farming. What started mainly as a curiosity in self-sufficiency and homesteading, ended up exposing them to a wider world of farming when they decided to pasture raise chickens. All it took was 25 hens and the seeds were sown. They knew at some point they would want to try their hand at full-time farming. Dan and Kim spent several years living abroad in Norway where they were extremely fortunate to be able to travel and get some hands-on experience. They volunteered on a farm milking goats and making chevre in France. They learned to make artisan breads in Tuscany with Carl Shavitz. And they also spent time assisting farmers in Copenhagen with Icelandic sheep during the lambing season. Based on these experiences they decided to return to New York to find a homestead to farm. They felt that the “best of both worlds” approach would be to combine a love of place with their passion for artisan fare. After an exhaustive search for land, they found an old farm to call their own and have begun the journey of starting a small farm from scratch in the fertile and bucolic Champlain Valley. There are still a lot of steps and challenges ahead, but their vision is to create an eco-minded farmstead that provides local food that mirrors the wild and natural beauty of the Adirondacks.