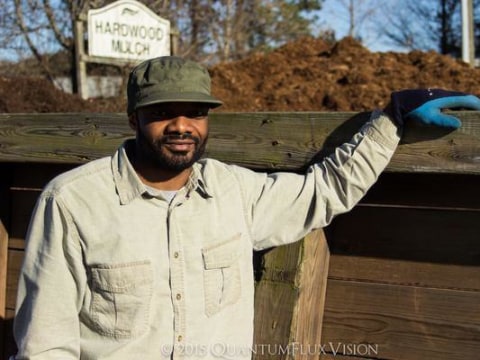 A loan helped buy small equipment and plants that will eventually mature into an edible forest.

Growing up in Hampton Roads, Virginia, my family always had a large, roughly 1-acre sized garden in our backyard. As a youngster, however, there were few things my sister and I disliked more than spending summer afternoons sitting in our garage-turned basement "picking beans". We would divide up buckets of string beans or butter beans between us, get our "stations" ready and then, being as mechanical as possible, try to minimize any wasted movements that would prevent us from finishing the task as fast as we could. Looking back, it wasn't until I moved off campus during my third year in college that first acknowledged appreciation for those fresh grown vegetables I took for granted as a youth. Actually, it felt more like a rude awakening when I went to the grocery store with my roommate and discovered the only collard greens I could buy were canned. At that moment, I became fully aware of the line in food culture, which separates the food we grow ourselves (or buy directly from local people who raise, grow or make it themselves) from the food that comes from farm factories, hundreds or thousands of petroleum-fueled miles away. A few years later, I had the opportunity to live and work in several developing countries, and with those experiences, the challenge for sustainable agriculture became clearer. How do we meet the food and nutrition needs of a growing population, without sacrificing the environmental integrity of local landscapes and the global environment? I went on to earn a Master’s in Practicing Sustainable Development, in an effort to nurture my passion and desire to make a positive contribution to the world around me. When my parents expressed desire to maintain some land they own on the Eastern Shore, everything clicked. I realized that restoring the farmland would allow me to help promote and enhance human and environmental health, so I began investigating resources and programs to help guide me through the start-up process. In September 2014, I applied for the Future Harvest - Chesapeake Alliance for Sustainable Agriculture’s (FHCASA) Beginning Farmer Training Program (BFTP) and was selected to participate as a 2015 farmer trainee.