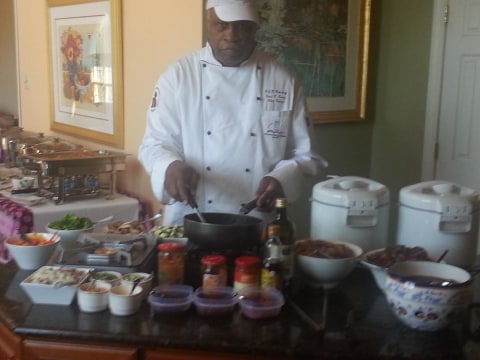 A loan helped buy a refrigerated dessert display unit for my restaurant.

Mr. Lewis has experience launching and running a wide range of restaurants, including working with Intercontinental Hotels, Marriott Corporation, and the five-star, five-diamond Homestead Hotel. 48th Street Grille has emerged as a result of a longtime dream of Mr. Lewis to expand the catering business and to launch his own, independently owned and operated restaurant. Taking advantage of the skills and experience he gained through nearly four decades of experience in the restaurant and hospitality industry, Mr. Lewis plans to offer his guests a delectable and relaxing dining experience. My fascination for culinary arts started at a very young age, I would watch my mother who was an excellent cook, prepared some tastiest Jamaican cuisines from scratch, and then tried to duplicates those dishes. Later on in my junior years in school, I would to go to the kitchen once a week to help. It was then that I had my first exposure to commercial cooking. During my senior year I was given the opportunity a technical school run by the Jamaican Military. I was there for approximately 3 years and was exposed to the culinary arts, baking and other types of cooking. In the early 70’s which was still an early part of my life, I had an offer to work with a very wealthy family. The wanted a butler, but I didn’t know anything about being a butler. I was hired anyway by this family who was willing to give me a chance, soon they hired a professional butler from Miami who came down Jamaica and spent about a year teaching me the fine art of being a butler, I was exposed to classical French and European cuisine. I worked with this family for over two years and decided that it was time for me explore opportunities in the Hotel Industry. I did so by joining the Intercontinental Hotel Chain as an apprentice cook at the age of 20. I spent 3 years under the mentorship of several Jamaican, Swiss, German and French Chef learning the fine arts of cooking and working my way up through ranks in the kitchen brigade system. I was still yearning to learn more and gain more experience so I started working in several local Asian restaurants acquiring the fine arts of Asians cuisines. After which I decided to return to the hotel industry, after working in several small resort hotels including the them famous Eaton Hall Resort where I was privileged host several meal for the G7 Summit which was held in Jamaica, I was given to work in several large resort hotels in Kingston and Ocho Rios before joining the Homestead Hotel in Hot Spring Virginia in 1980 before joining the Marriott hotels in 1982 with a combined history of 20 years of service and 7 years at Temple University Hospital. My career has spanned over several areas of the hospitality industry Over these years I mentored several young chef and cooks. My Passion, Dream and Vision is to continue to develop and mentor young and upcoming chefs. 48th Street Grille would allow me to create opportunity for several young individuals in the neighborhood and outside, an opportunity to learn culinary arts. In summary I have a wealth of knowledge for others, and want to give back as much as I can