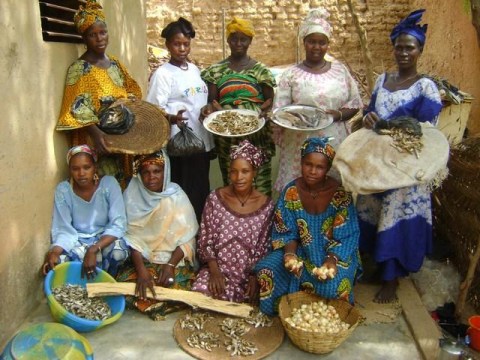 A loan helped purchase of fish to sell.

This Djiguifa group is made up of nine married women, mostly from monogamous families, with an average age of 33 and 4 children, on average. They all live in the Djaka kin neighborhood of Kirango Markala (4th administrative region of the Republic of Mali) and they met because of being neighbors and friends.

This group essentially sells fish. Besides fish, certain of them sometimes sell onions and firewood out of their homes. So as to increase the volume of their money-earning activities, they decided to join the loan program of Soro Yiriwaso. After having reimbursed their first three solidarity loans correctly, they are on their 4th, which will be used to buy 60 baskets, corresponding to 900 kg of fresh fish.

They buy their fish on the banks of the Niger River at Kirango. Part of the fish is dried in a corner of the house on a traditional dryer and the other half is sold raw. The dried fish is sold retail and on a cash basis in the market fairs of Konobougou, Sansanding and Siribala to a clientele composed mainly of women. They each expect to make a monthly average profit of 51,000 F CFA which will be used to reimburse the loan and to add to savings. Their ambition is to each have a freezer so that they can keep the fish during periods where sales are slow.