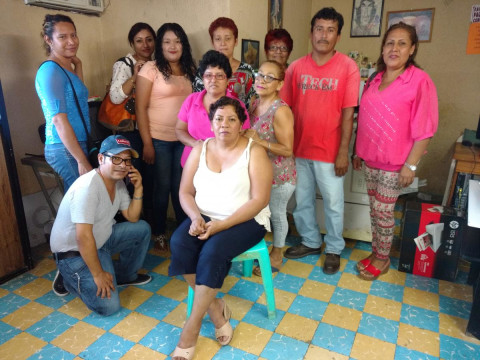 Fantasía Group's loan finished fundraising, but these other borrowers need your support

In a city of Veracruz, the locomotive know as "the beast" transports sugar, oil, or stone. It is worth mentioning that the railroad was instrumental in the growth of what was, in past times, a town and is now a growing city. While the train was originally a method of transportation for passengers, today it is used only to transport cargo.
The loan group "Fantasia" was formed in one of the local neighborhoods. The members chose this name because, sooner or later, their dreams come true. They are: María, who has a computer center; Nancy, who raises pigs; Gabina, who sells shoes and clothes; Guadalupe, who has a nutrition club; Susana, who sells shoes; Aurora, who sells shoes and cosmetics; Victoria, who sells food, shoes, natural products, and cosmetics; Cruz, who sells wood and shoes; Jesús, who sells bread; Mario, who sells food; and Paulina, who sells cosmetics.
María Mireya is a very hardworking and responsible woman who is known to everyone as Doña Mire. She and her husband, Ángel, form a family with their 4 children who are all grown up. 12 years ago, she decided to invest her spare time in a computer center after she took a computing course offered by the town. She set-up a center next to her house and, although she only had 2 computers at first, she has since added 4 more and a printer.
Her timetable is from Monday to Sunday, 9:00am-10:00pm and she attends to her customers' needs with pleasure. "Some students need to send something urgent and can come here" she says, adding: "everyday I learn something new, and I am proud that, even though I am an adult, I am familiar with the technology that is my source of income."
She will use the loan to buy: a mouse, headsets, 2 regulators, toner, colored ink, paper, and a small laminator.
* The photo was taken in Mire's business and she is behind Victoria, who is wearing a flowered blouse in a coffee collar and denim.