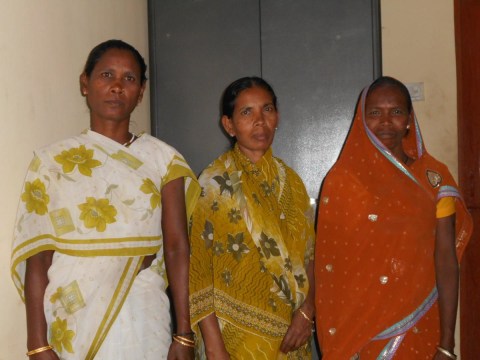 Sona's Group's loan finished fundraising, but these other borrowers need your support

A loan helped to build an appropriate closed and hygienic toilet.

Many deaths in India are caused due to the unsanitary and unsafe practices followed by the people of rural India who are victims of a sanitation crisis. This sanitation crisis makes them face innumerable problems, and this not only affects their health but also makes them spend an unnecessary amount of money on medicines. Other health hazards are caused due to open defecation and adoption of unsanitary practices.

Sona is a simple lady standing to the left in the photograph. A humble resident of a small village of Rajgangpur, Odisha, India, she is one of the victims of the sanitation crisis that persists in India. She does not have access to a toilet in her home, nor in her immediate vicinity, and this has given her sleepless nights.

She and her entire family have to trek a long distance to relieve themselves in isolated places. Being a sensible and a practical lady, she does not find this practice safe and feels the risk of crimes and molestation. She also thinks that this practice in the long run may cause disease, and she may end up spending a major portion of her earnings on medical expenses that could be prevented if appropriate steps were taken beforehand.

Therefore, Sona, along with her fellow group members, is requesting a loan amount of 45,000 INR from Kiva's partner Peoples Forum. She will use her portion of the loan amount to build an appropriate closed and hygienic toilet so that she no longer has to follow those unsafe and unhygienic unsanitary practices. She can increase her savings, which she can use in a productive way in the future.

Sona is eagerly awaiting your kind help so that she can enjoy a healthy and disease-free life.