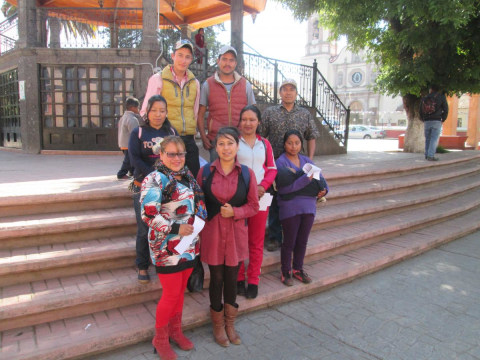 A loan helped To buy a motor.

A Mexican community is characterized by having hard-working residents that are proud of their roots. They are very dedicated to the land and the traditions of their village; as it is small, they remain very united. It isn't difficult to find people riding horses and growing corn, fava beans, pumpkin and beans, or the diverse animals freely grazing on the land, only to be watched over by a calm shepherd. Rene is part of the group, "Buenavista", located in said community, and like his fellow countrymen, he is very hard-working, kind and happy. His main motivation in life is his family, made of his wife, Rosa, who works in the home, and their four children, who continue with their studies. In order to meet his obligations and his goals, he opened a mechanical workshop several years ago, because he remembers that when he was 13 years old, he watched how his father spent all of his days repairing cars and motorcycles. "From the time I was very little, I learned to tune cars because my father alway wanted me to get ahead," he said while smiling. For a while, the competition has been growing, which makes sense in a community where the population is increasing considerably. Far from pushing aside his business, however, the situation only makes him more motivated because he knows that every effort is worth it for his children. On the other hand, he is very grateful for the help of VFMexico because from the time they started working together, he has seen positive changes. On this occasion. he would purchase an engine because he is trying to fix a car that, once ready, will generate an income of double or more. His biggest dream is that his children can study a professional degree and dedicate themselves to their passions. The rest of the members of the group are Vianka, who will invest in a trinket shop; Ana Yesenia, a grocery store; Guillerma and Jesus, in sheep; Georgina, in clothing; Clementina, in chickens and Fernando in pigs. The photograph was taken on the steps of the town center, and Rene is wearing the blue shirt.