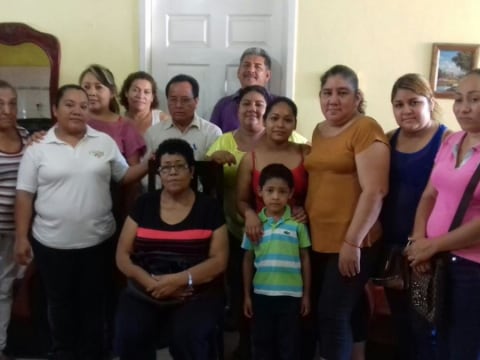 A loan helped to buy zippers, buttons, threads and to complete the needed amount for a new machine.

The representative food of this region (the sun's bride) and its surroundings is beef barbecue. This is why it has been called the typical dish of the municipality. It is worth to mention that other foods are also important, such as tamales, cassava and corn, "cabecitas de perro" (another type of tamale), dairy products of great quality such as "ranchero", aged and string cheeses; typical dishes such as garnachas, puritos, prepared potatoes, tripe, rellena, chileatole, tesmole (soups), just to mention some of them.
"Los Dulces" is the name of the group formed in one of the colonies. They chose this name, because previously one of the group members worked selling sweets.
Currently, the group is formed by: Maria- canvas bags; Alfredo -taxi services; Yanet - nutrition club; Guadalupe – Clothing; Amalia - sewing; Celina, Minerva, Nancy - food; Miriam - shoes; Anita - desserts; Olivia - Silver; Carlos - spare parts shop.
Amalia is a 64 year old, very hardworking woman. She formed a family with Simon. Their six children are adults. When she was a girl, Amalia used to play to sew clothes for her dolls and those of her sisters. "I liked to sew small clothes with my father's old t-shirts. Once I used a new t-shirt and cut it. When my father looked for it and my mother noticed, they scolded me", Amalia mentioned laughing.
Forty years ago, Amalia decided to work in her passion, and this is how she started her small sewing workshop. Previously, she attended some courses for seamstresses. because she used to cut and sew based on measurements. The courses allowed her to perfect her technique and be able to generate her own outlines based on her customers' measurements.
"If before I used to sew for my dolls, nowadays I even sew brides' dresses. The most satisfactory part is to see my customers' happiness", Amalia expressed happily. She also commented that when she started, she used to sew with a Singer pedal machine, a black machine on a wooden base. The obtained earnings allowed her to support her husband with household expenses, and to buy thread, needles, pins, cold tape, buttons, zippers and stones, besides allowing her to save enough to buy herself an electric sewing machine.
Amalia spends a great part of the day behind her machine, sewing the clothes that her customers request. She has invested the loans to buy thread, zippers, buttons, cold tape, needles, pins, chalk, a new pedal for the new machine, so she can continue offering quality service to her customers.
"God bless you for your good actions, for supporting us to grow with our businesses. From the bottom of my heart, thank you", commented Amalia gratefully.
*the photograph was taken in Amalia's house. She is wearing a black blouse with an orange strip.