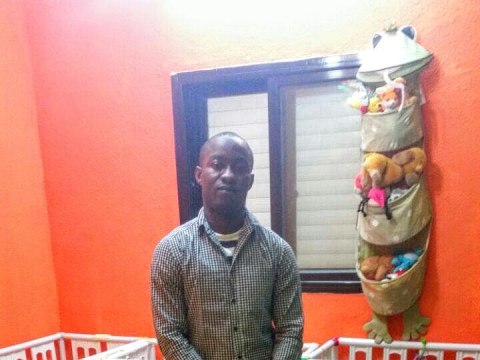 Christian's loan finished fundraising, but these other borrowers need your support

A loan helped to purchase two air conditioners, toys, beds, chairs, closets and synthetic grass for the kindergarten he and his wife operate.

Christian is from Nigeria, married with three children and one on the way, 9 years in Israel. He came to Israel to escape his situation in his own country. Christian has an online clothing shop and recently opened a kindergarten.

The area that Christian lives in, South Tel Aviv, is home to thousands of migrant workers, refugees and asylum seekers, legal or illegal, mostly from South Asia and Africa. In Israel, working families with babies and toddlers bring their kids to private kindergartens, which tend to be very expensive. There is no affordable kindergarten for the babies and toddlers of refugees, asylum seekers and migrant workers, who cannot pay for the expensive daycare.

Being a father of three and one on the way, Christian and his family experienced firsthand this community-level problem affecting many families in the South of Tel Aviv.

Together with his wife, Christian turned this personal need into an enterprise and took this challenge into his own hands. He decided to open a private kindergarten in his house, which will serve his kids and the kids of asylum seekers, refugees and migrant workers in his community. Christian worked with local municipal professionals to make sure his kindergarten will be up to safety standards.