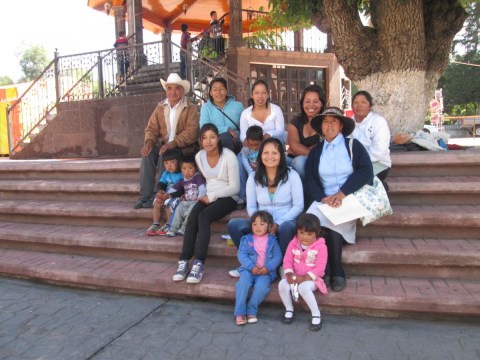 A loan helped to buy animal feed and corn.

The members of this group chose the name El Bosque ["The Forest"] because where they live or hold meetings is a place with a lot of trees, vegetation, and corn fields. The place where they meet is really pretty; everything is starting to flower and become green, which is what makes it look especially nice. It is a community where their traditions, such as the handshake, are still maintained. Some people still speak their mother tongue and wear traditional clothing.

Ma Isabel is a very kind and hard-working person, but above all, she has a great enterprising spirit. She is 49 years old. She has lived in a common law marriage for many years. Together, they have formed a family with three children, one of whom is currently attending secondary school.

For the past 24 years, she has made a living by raising and fattening pigs. She says that she started the business because it was a very easy business for her, without any difficulty, because she keeps the pigs enclosed, cleans them, and feeds them. She gets up very early to start tending to her animals. Even though in her community a lot of her neighbors make a living by raising lambs, that is a trade with a lot of difficulties for her.

She says that she buys the pigs when they are very little, only 30 days old. For 4 months, Isabel works caring for them in order to grow and fatten them so she can sell them later. She says that her earnings are very good. Little by little, her quality of life has improved. She has been part of VFMexico for a few years now, which has been very helpful because she now has 30 pigs. Her difficulty is when the price of corn goes up because she can't buy it in large amounts for her animals, due to the price. But thanks to the loan, Isabel can get the feed and the corn for her pigs, in order to feed them.

She has grown not only with the animals, but she also has a grocery store from which she makes money. "One season my husband got sick, and our two businesses were a great help in order to get my husband's treatment," she says happily.

Currently, her only job is to return to having the number of pigs that she used to have. In recent years, the price of corn and animal feed has not been favorable for her. She has two pens, and each one of them has 10 little baby pigs.

*The photograph was taken on the steps of the municipal kiosk. Isabel is the one in the white sweater behind the woman in the hat.*