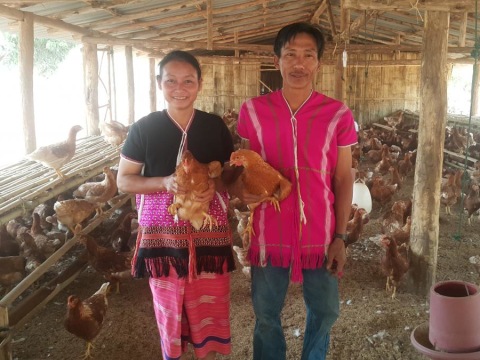 Duangmanee's loan finished fundraising, but these other borrowers need your support

A loan helped To buy chickens for an organic egg farm.

Duangmanee, pictured here with her husband Utai, is preparing to launch an organic chicken farm in her native northern Thailand. Both Duangmanee and her husband are now in their early 40's, raising their three children at home. Duangmanee is a member of the Karen tribe in Chiang Rai, Thailand, one of several different ethnic groups who make their homes across the mountain ranges of southern China, Laos, Burma, Vietnam, and Thailand. For her entire life, she has grown rice and vegetables on family land in the mountains near her home. But because prices of her farm goods go up and down, her income is very unpredictable, and is rarely enough to support her family. With a 112,000 THB loan, Duangmanee will be able to buy 700 egg laying hens to raise on farmland that until now has been unable to grow crops. Selling the eggs she gets every day can potentially more than triple the income Duangmanee makes currently, roughly 220 USD/month. And, because she can only sell rice once or twice per year, her new egg farm will give Duangmanee and her family a monthly source of cash for the first time in their lives, which she plans to use to send her children to study.