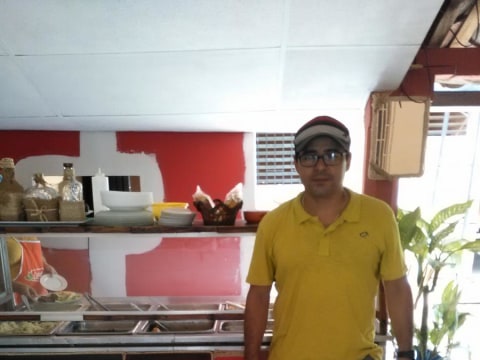 A loan helped to buy paints, tables, and chairs to give a better image to his cafeteria, and improve services, and to buy laminate to make a stand on the sidewalk.

Rafael is an entrepreneurial man. He studied until high school, and he is in a happy relationship. His wife works in the home, and also works with him in his cafeteria business. They do not have children because of health issues, but they have known how to live together and fight to get ahead.
Rafael is a very versatile person. Since he was little his father taught him to work in agriculture. As he was growing up, he became interested in other productive activities and he worked in commerce. He had a business selling traditional foods, and he also sold pork. Currently Rafael has ventured to open a cafeteria in the center of the city, with the objective of selling lunches to all the employees in the nearby stores. It has been six months and thanks to God his clientele has been increasing.
The requested loan is to buy paints, tables, and chairs to give a better image to the cafeteria and to improve services. He will also buy laminate to make a stand on the sidewalk.
Rafael dreams that his business will continue to prosper in such a way that his clientele will increase and to open another cafeteria in another area of the city. The objective is to improve the quality of life of himself and his wife.