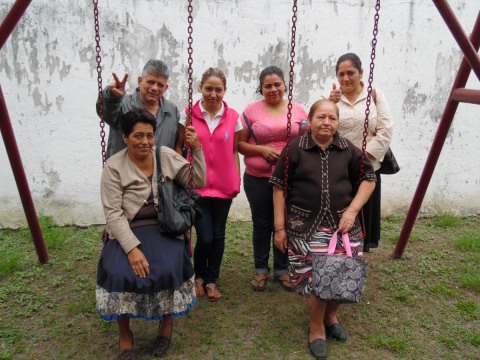 La prieta Linda" (Black Beauty) is the name of the first steam engine that chugged along the rails in one Veracruz town. Its arrival was an impetus to the considerable growth of what was once just a village. That very engine is now preserved in the city as an historical monument and symbol of its identity.

The group "Emperatriz de America" (Empress of America) was formed in one of its neighborhoods, "La novia del sol" (The Sun's Bride). Its name refers to its members devotion to the Virgin of Guadalupe. They are: Juana, who will invest in footwear; Aurea and Antonio, fish; Graciela, footwear and food; and Sandi, shoes and clothing.

Don Antonio is a very responsible and hard working man. All his friends call him Toño. He has a very close relationship with his wife Aurea. They have two children who are still financially dependent on them. Previously he spent more than seven years working in a grocery store with the express purpose of helping his parents cover rent and education expenses. "We had little money. We all worked but we didn't earn much and our landlord treated us badly", he said in a broken voice and with tears in his eyes at remembering their situation. Nevertheless, things changed a short while later. "I had always dreamed of owning my own business and when I heard that someone was selling a fish market I was hopeful and I mentioned it to my boss and she loaned me the money to buy it", Toño said gratefully.

In the beginning he had to learn how to be a fish monger, which is not easy if one does not have the necessary experience. Now, after 44 years in the business, he is a total expert and his customers are very satisfied with his products as well as his warm service. Regarding his loan from VFMexico he says, "The trick is not getting it but staying on top of it and we need to know how to invest to improve our business." In this case he wants to buy different types of fish as there will be a big demand for it during Easter week.

*The photo was taken at "La novia del sol". Don Toño is the only man in the group.