In honor of World Refugee Day, show your support with a loan! 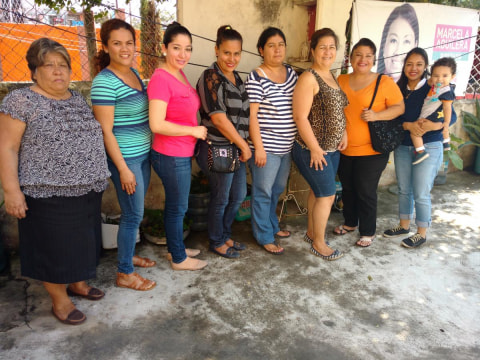 “La prieta linda” is the name of the first steam locomotive to go over the tracks of a certain community in Veracruz. Its arrival boosted the region's growth, which grew considerably from being just a little town to being an emerging city. Said machine is currently kept in the city as one of the historical monuments that also gives them identity.

Vianey is a very hardworking and happy woman. She is better known as “la güera” [the light-haired one] within her community. She has a very closely knit family, along with her husband Abraham who works on the railroad. They are the parents of two daughters, one of whom has made them grandparents.

For more than eight years, she has made a living in clothing sales. At the beginning, she would go out to offer her garments as a street vendor. In other words, she would go from house to house so that people would start to trust her and the quality of her merchandise. As time passed, thanks to her earnings she was able to set up a room in her home where, for the past five years, she sells in a permanent location. Likewise, she makes and sells cakes, jellos, flans, etc. "I feel very happy to be able to practice what I have learned," she expressed happily, since she went to various baking classes. The opportunity of the loan will be invested in buying pants, skirts, blouses, t-shirts, and shirts since her customers have placed various orders.

Her plans for the future include expanding her clothing shop and opening a bakery, since her customers have suggested that she merge both businesses. "I am happy with my family. They motivate me to generate income and to be a source of support for my husband," she expressed happily while carrying her grandson.

*The photograph was taken on Nadia's patio. Vianey is wearing a blouse with animal print.