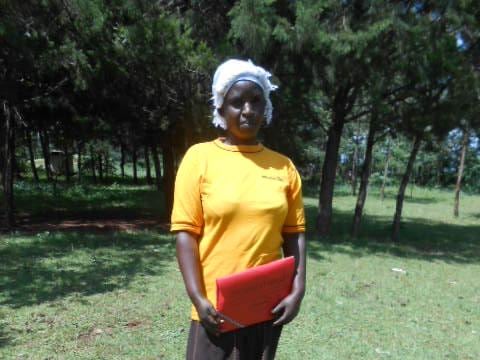 A loan helped to buy cost-efficient maize seeds and fertilizer for the coming planting season.

Angela is 43 years old and has six children. She has been a farmer for fifteen years and is known as a very hardworking individual. Even though Angela is the only one featured in the above picture, she is actually representing her group formed by thirteen farmers in Webuye District, Kenya.

In 2009 Angela started working alongside Kiva's field partner One Acre Fund and decided to do so because she wanted to have access to quality training and acquire new farming methods. Since then, she has seen her life improve, especially in the sense that she has been able to consistently feed her family ever since. This year she decided to represent her group because she wanted to be more active in her community.

Angela’s Group will receive a loan of 77,570 KES to be used for farming inputs such as maize seeds and fertilizer to plant a total of 5.5 acres of land. Additionally, some of the farmers in the group will be purchasing a solar light as a part of this loan, so the group will also receive eight solar lamps.