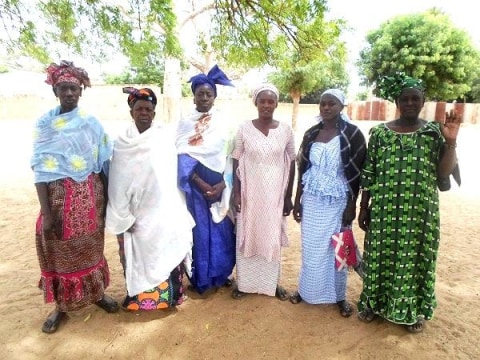 This seven-member group is part of the "banc villageois" ["village bank"] which was formed on February 7th, 2001. The group is made up of women who live in the same village and neighboring villages, who share the same culture and language, and who have good relationships with each other. Their main business activities are trade and livestock fattening. Khady, standing on the right of the photo and raising her hand, is the represented borrower. Khady is 58 years old, married and the mother of ten children, six boys and four girls. She as been the treasurer of the "banc villageois" for the past several years and takes her role seriously by always setting a good example. She is a merchant with many years of experience and runs a store from her home. Khady has always repaid her loans without any problems. With this next loan, she plans on purchasing three 50 kg bags of sugar (28000 XOF each) to resell the sugar for 650 XOF per kilo; four 20 L cans of oil (15000 XOF each) to resell the oil for 1000 XOF per litre; two boxes of powered milk packets (8000 XOF per box) to resell for 100 XOF per packet; two cases of tea (10000 XOF and 20000 XOF) to resell each packet for 100 XOF; five boxes of soap (4000 XOF per box) to resell for 300 XOF per soap. The rest will go towards buying detergents and biscuits in order to resell them. She borrows when she runs out of stock. She will use her earnings to contribute to the "banc villageois" savings, to buy rice for her family and to help her husband with other household expenses.