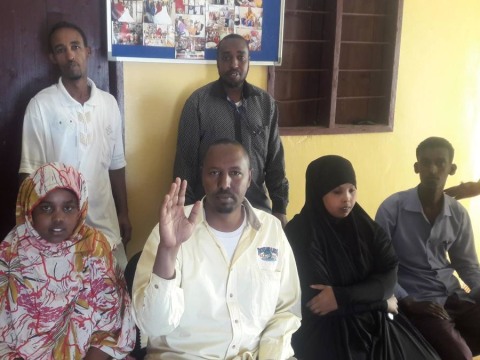 A loan helped to buy furniture for his public notary office.

Isaq is the chairman of Suuban Group and the group consists of six clients, and each one of them has his/her separate business. Isaq was born in Gabiley on April 13, 1966. He finished his primary and intermediate schooling in Cadaadley School, while he finished his secondary schooling in Tima-ade Secondary school in Gabiley. He is the father of ten children, four girls and six boys, and he is the head of his household (his family depends on him). Isaq is the owner of a public notary in Gabiley which he established in 2012. He has been one of Kaaba's client from 2014 up to now. He works hard and has the largest public notary in Gabiley, after he got investment from Kaaba Microfinance's Gabiley branch.

Now, Isaq needs furniture for his notary office, to enlarge and improve his services, and requested a loan of $2,000 from Kaaba MFI to purchase chairs and tables for his business. Then he will pay monthly repayments. Each group member has his/her separate business, so each client will take a separate loan. Isaq is the one rising his hand in the photo group.