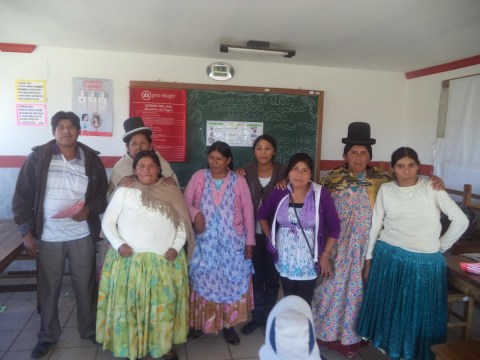 Rositas Group's loan finished fundraising, but these other borrowers need your support

A loan helped to buy wool in bulk.

The “Rositas” communal bank is starting its seventh loan cycle through Pro Mujer’s Los Andes office. The bank has eight members, and is run by a board of directors that has Herminia as President. The members have different business, including: sales of aluminium furniture, clothes, meals, and breads, transport services, a business selling hats, and another selling blankets.

This loan will be used to help small-time entrepreneurs in this group. One member is Herminia, who says that this is the first year that she has joined Pro Mujer, having come following an invitation from a friend who is already a member. Herminia currently has a business selling blankets . She says that she started the business under her own steam a few years ago.

This loan will be used to increase capital by buying wool in bulk from wholesalers in the cities of La Paz and El Alto. Herminia will later use the material to produce and sell goods at her business. This work allows Herminia to earn a living to give her family financial support; Herminia is married and has three children.

When asked what she likes about Pro Mujer, Herminia says that she likes the training and health facilities offered by the organisation.