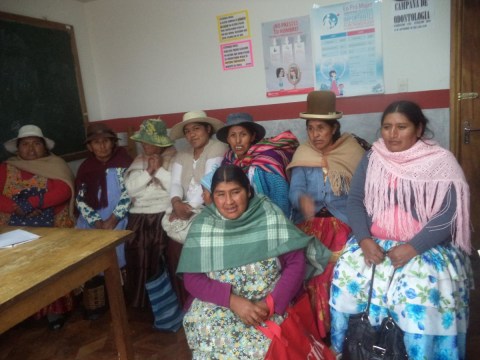 Violetas Group's loan finished fundraising, but these other borrowers need your support

A loan helped to purchase jackets in bulk.

The Violetas communal bank group will begin its seventh loan cycle with Pro Mujer as part of the Centro Focal de Los Andes. It is made up of eight members and is led by officers of whom Trinidad is the president. The businesses that the members of the communal bank carry out are varied and among them are clothing sales, food sales, bread sales, transportation service, hat sales and blanket sales.

The loan that they are getting will benefit the small micro-entrepreneurs of whom Trinidad is one. She says that this is the third year she has joined Pro Mujer, joining at the invitation of a friend who is a client of the institution. Currently, she has a business selling clothing. She says that she undertook this business some years ago at her own initiative.

The loan that she will now get out is to increase her capital (purchase jackets in bulk) which she will get from the wholesalers in the cities of La Paz and El Alto and later she will sell them in her sales space. This type of work allows her to generate resources to support her family economically since she is married and has a child.

When asked what she likes about Pro Mujer, she replies that she likes the training and the health center that the institution offers.

Note - Jose was at the payout with his wife, after the payout, Jose had to leave because he had to go to his source of work, and instead of him, his wife stayed and for this reason, the eight members who are in the photo are women.