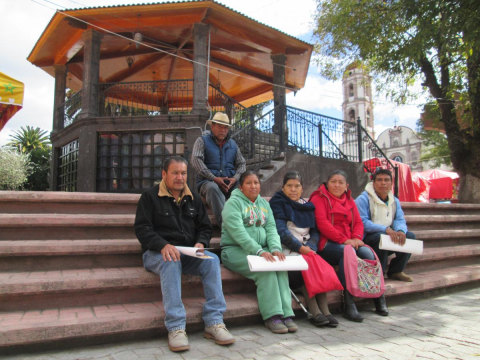 A loan helped to buy fertilizer for potatoes.

In a community of the state of Mexico, its inhabitants, which are farmers, wake up very early and leave their houses to work in the fields or their places of work. The majority are seasonal workers. While the first thing the housewives do is go to the mill and grind their nixtamal [prepared corn] to make tortillas that are a fundamental ingredient on the table of their homes. A large part of the population earns a living raising and fattening animals in addition to growing corn and potatoes as sources of income for many families. For this reason, the members of the group decided to call themselves "Papas Productivas" because in their region many grow potatoes that they can harvest twice each year.

Claudia is a young woman who is very excited about the loan. She is very kind and talkative, and always with good humor. She is 24 years old, single, and still lives with her parents. Since she was very little, she saw how her parents worked by growing potatoes, "It really is a good business, and there are very good sales," she says.

Five years ago she decided to also start a similar business, so she joined up with a sister so that they could start the business together. Her father gave them land, and they took charge of growing potatoes while he supported them in some processes such as planting, or the process of treatment. They plant in the month of May for three or four months, and in October they return again to plant on their land and thus obtain another harvest in the year.

Clau, as she is lovingly called, is very happy because she says that fortunately her harvests have been very good. Now with her loan she will be able to buy the fertilizer for her crops that she already has planted and will be ready to be harvested within one or two months.

She says that her only difficulty is when her crops are sick (with pests). This creates a big challenge in making a good income possible, and when the pests get into the crop it is difficult to combat them. "Even though we spend a lot to fight the pests it is much better to to do so rather than lose all the production," comments Clau. Her goal is to have a larger production. Even though she already makes large deliveries, some of them are not very secure, and for this reason she will look for more providers.

The members of the group are Tomasa and Mouricio who will invest in grocery items, Pablo in automobile accessories, Angelica in growing potatoes, and Juan in sheep.

*The photograph was taken at the kiosk staircase. Clau in the one in the red sweater.