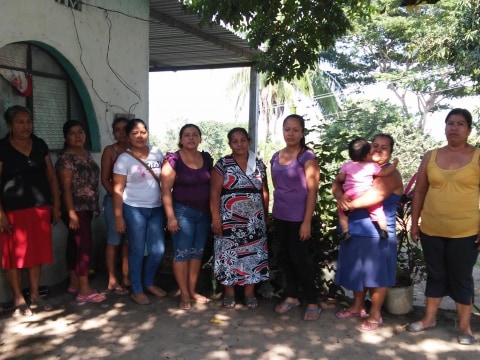 Certain communities in Oaxaca are considered edens because they are surrounded by different fruit crops cultivated by the inhabitants for generations. In the same manner, the song birds and natural richness of its landscapes create a special atmosphere that invites relaxation.

Luciana is mother to 7 children and grandmother to 13 grandchildren, who, when they visit, fill her home with joy. Seven years ago, Luci, as she is known in the community, received her 1st loan from VFMexico, with which she initiated her chicken selling business with good results. After two years, thanks to the income she generated and the subsequent loans she received, she was able to open a grocery store.

During the week, she has to wake up very early to prepare for the business day as she is the only one who sells chicken in the community. And then, when all is ready, including the shelves where she displays her grocery items, she opens the doors wide to happily receive her customers.

With the loan she is requesting, she will invest in rice, sugar, beans, soup, oil, tuna, mayonnaise, eggs, matches, detergent, toilet paper and 20 chickens to answer the demand at the beginning of the year.

She comments: "I'm happy with my activities as they keep me active and I generate my own income."

*This photo was taken in the space where Lidia and her sisters have their traditional food business. Luci is wearing a red blouse and black skirt.