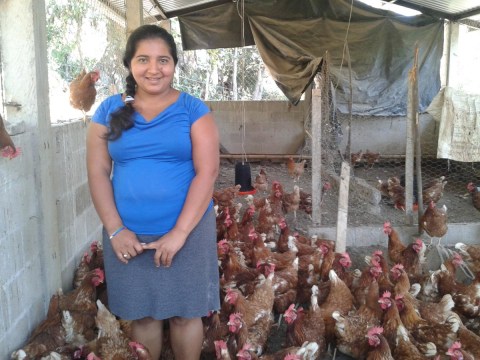 Marta Dalila's loan finished fundraising, but these other borrowers need your support

A loan helped to buy concentrate, vitamins, and other things for the laying hens.

Marta is 35 years old. She studied until 6th grade in the community school. She lived with her parents and had to work in the mornings and study in the afternoons. She is a single mother of four children who study in basic level school, three in the community and the oldest one has to travel to the nearest town in the early mornings.

Since Marta was young, they used to send her to sell vegetables and fruits in the city. Now she raises laying hens, a project that she started through her own initiative three years ago. She also sells fish and snacks such as enchiladas, sweets, breads with chicken, and beverages among other things during the work week. She also sells bread two days of the week. Her oldest son waits for her in the town where he receives classes and they go walking and selling the bread through the communities.

She is requesting the loan to buy concentrate, vitamins, and other things for the laying hens and thus improve her farm little by little, and so that she does not lack income for the family.

Her dream is to improve the house since it is made of adobe. She wants to give better security to her family through the home and being able to help her children finish school. Additionally, in the future, she plans on making a little swine farm to fatten them and sell them.