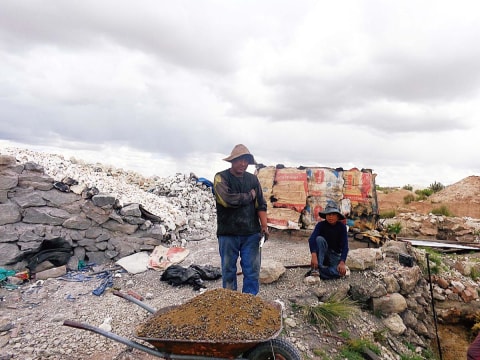 A loan helped to buy fuel to make stucco.

Nicanor is 36 years old and lives with his wife and four children. He has two boys, ages five and fourteen, and two girls, ages eight and eleven. He works making stucco.

He is a strong person, a go-getter, and a hard worker. He runs his business in Vichaya province, a rural area located in the uplands. Most residents here work mining for limestone to make stucco and making crafts in plaster.

Nicanor's first language is Aymara, but he also speaks Spanish. His wife works in the same business and his children are in school and also help them at work. They live in their own adobe room, which is connected to the power grid but doesn't have running water or a sewer-system.

In order to make stucco, you must mine for the natural rocks that you need to break down, grind, and cook in a home oven. The area is arid and there are no trees or bushes, so the fuel they use is cow dung from the cattle, which is gathered by the children and stored for use.

"This is hard work, particularly because we have no water and we have to go to the river, which is a ten-minute drive," he says. His business is successful because he sells his product to hardware stores and regular customers. His main advantage is that he offers wholesale prices, and his main disadvantage is that fuel is scarce. His goal is to be able to increase production, and having more fuel will allow him to do this. He has been in business for five years, and this is his first loan cycle.