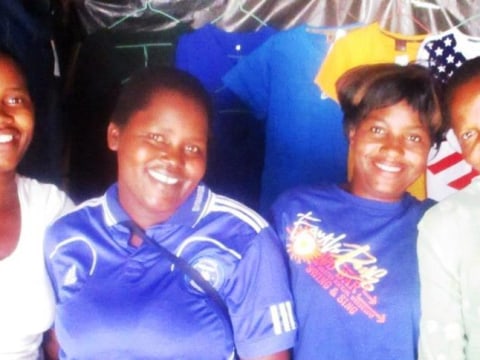 Ngazviende Mberi Group's loan finished fundraising, but these other borrowers need your support

A loan helped to buy more clothing so that she can cater to the increase in demand at Christmas.

Dressing tells a lot about someone’s story. Most people endeavour to put on the most fashionable clothes as much as possible. Future is one of the people who ensures that people in the high-density suburb of Highfield keep up with the modern trends in the world of fashion. She owns a flea market at a local shopping centre in Highfield Harare. At her flea market you find ladies' and men's clothes, kids' shoes as well as ladies' shoes. Every month she has to travel to South Africa to buy stock for her flea market.

Future is a 29-year-old married woman. Her husband is a self-employed cell phone repairman who also works in the same shopping centre. They have two children who are still in primary school. Future, Tatenda, Kupurai and Rudo are part of the Ngazviende Mberi (Shona for ‘forward ever’) Group. The four have known each other through business. All of them have flea market tables. Currently Future has no employees but leaves one of her friends in charge of her flea market whenever she travels to South Africa for restocking.

Future is a focused and determined woman and this has enabled her to be able to keep her business running smoothly regardless of the current difficult economic situation facing the country. Future and her group members came to Thrive for the first time in October this year. They received financial literacy training, which helped them improve the way they run their businesses.

Now with the festive season approaching, Future needs to buy more clothing so that she can cater to the increase in demand. Most employed people will have received their Christmas bonuses so they will have the economic muscle to buy more. The Ngazviende Mberi group members are requesting a combined loan of $1200.