In recent years, the global refugee crisis has reached unprecedented levels. Today, over 65 million people have been displaced from home, including both refugees and internally displaced peoples (IDPs). Six in 10 refugees are in exile for more than 10 years, often living in camps and settlements.

While immediate and urgent humanitarian assistance is vital for refugee communities, as situations become more protracted, the need to focus on longer-term solutions becomes increasingly important. These solutions include access to financial services, jobs and better livelihoods. However, most formal financial service providers (FSPs) and microfinance institutions (MFIs) are reluctant to work with refugees for fear of financial loss. As a result, refugees have severely limited access to credit and financial services.

Problem #1: Financial service providers won’t serve refugees and displaced peoples because doing so is perceived as too costly and risky 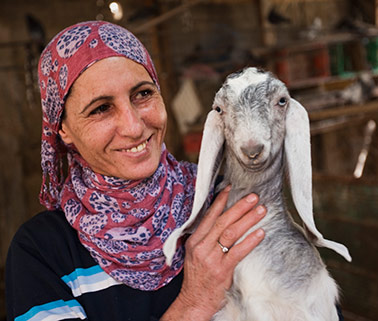 Najah, a mother of 5, lives in a Palestinian refugee camp near the West Bank city of Jericho. She used her loan, which was funded by 69 Kiva lenders, to purchase 6 sheep.


Problem #4: The influx of refugees and IDPs places a new burden on host countries and populations


Al Majmoua, in Lebanon, has developed a group loan product bringing Lebanese nationals and Syrian refugees together. Their efforts begin before the loan itself, as Al Majmoua holds social meetings and events focusing on non-financial services which include both groups. Al Majmoua then provides loans to mixed groups of Syrians and Lebanese, allowing for refugees to mix and work with Lebanese nationals, thus fostering social cohesion.


*Problems and solutions are based on Kiva’s experience working with Field Partners in refugee affected areas and are also informed by recent efforts by the Social Performance Task Force (SPTF) and the United Nations High Commissioner for Refugees (UNHCR).

We want to see Kiva funding reach more refugees and IDPs, while also supporting those in host countries impacted by the refugee crisis. We define success as:

Financial Inclusion of Refugees: An Introduction

The Future of Refugee Financial Inclusion

Find a loan on Kiva

UNHCR Figures at a Glance »